Jessie Villars is a testament to the healing power of cannabis and the industry’s ability to pay it forward to those suffering.  “I started as a patient in Medical Marijuana for five years, there have been many benefits. I started making my own edibles and people liked it. And then I got involved in a store,” Villars said regarding her own experience.

Villars now has a CBD catering business called ‘Baked by the River‘ with her boyfriend Cord Schlovohm where they specialize in infused desserts including a wide variety of cakes, cookies, pies, pastries, and muffins. She herself is a Medical Marijuana patient and lives in Lambertville.

She is planning to get into cannabis infusion when the market becomes legal.  Villars often uses coconut olive, oils and make meals for patients, a CBD dinner, cake, and a dessert for specific event.  She said she likes three tier lemon coconut cake the best along with devil’s food chocolate cake with peanut butter mousse  filling and chocolate ganache.

“I’ve always loved baking, as a coping mechanism, it’s been incredibly beneficial,” Villars said. She noted that under the law, she cannot make adult-use edibles. She does however make medical marijuana infusion tutorials and baked edibles for patients using their prescription mixed into coconut, butter or olive oil. Coconut is best when baking strong THC edibles because it has a high saturated fat content and absorbs more than butter.

Villars is sensitive to those with dietary restriction, saying “we work with Gluten Free, sugar free, pescatarian, vegetarian and vegan cookies.” She added that she uses rice flour, almond flour gluten free alternatives, and have celiac disease.

They have been together four years and work together as well at Baked By The River.  Villars said they work well together because she has a mild disability so heavy lifting and chopping are more difficult for her.

“We’ love it. Unless I leave dirty dishes in the sinks but there’s edibles so it’s all good in the end,” she joked.  When they met, “We were both opioid addicts and getting sober at same time.… so we were the only two trying to stay away, clean on our own terms and we helped each other in that first year.”

“It was a perfect time to find each other because we needed to lean on each other and Medical Marijuana prescription to stay clean,” she noted.

Villars and Schlovohm moved from Chatham to Lambertville two years ago to a pace near the Delaware River on whose banks the town sits. Villars said they have fallen in love with the area, having made strong connections in the local business community and often cross promote. And that she buys chocolate local for her cakes and buy their CBD from a store in town.

They both work on Main Street in New Hope, Pa across the river from Lambertville. Together the two towns are a lovely center of a regional arts community that prides itself on diversity. She added the weekends in the area are very busy as a recognition of it as a great tourists’ area with an active nightlife.  Villars believes that edibles are the healthiest method of ingestion, especially for those seeking to avoid inhaling smoke.

“I’d like to work with medicine dispensaries to get referrals for alternative options for medicine.”

Villars recently did her first presentation on CBD at North of Normal and is planning to do more on CBD education courses since the demand for it is so high. She is especially interested in treating specific ailments such as cancer with cannabis and making topical creams. 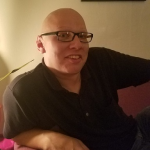 Daniel Ulloa is an accomplished writer who has covered domestic politics and policies at all levels of government. He was a reporter for four years, delivering news on local and state government, health and economic policies, and the federal response to housing, financial, and student debt issues, before focusing on the cannabis industry.

His writings haave appeared in Folks Magazine, the Pot Network, Freedom Leaf, Cannainvestor, and Emerald Magazine, among others.

Daniel Ulloa is an accomplished writer who has covered domestic politics and policies at all levels of government. He was a reporter for four years, delivering news on local and state government, health and economic policies, and the federal response to housing, financial, and student debt issues, before focusing on the cannabis industry.

His writings haave appeared in Folks Magazine, the Pot Network, Freedom Leaf, Cannainvestor, and Emerald Magazine, among others.